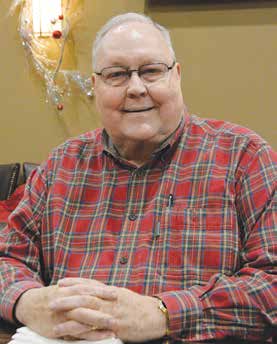 The recipient of Bismarck Library Foundation's 2020 Pearce Award for Library Service, Dick Weber, was a longtime supporter of the Bismarck Veterans Memorial Public Library, providing countless hours of volunteer time in addition to generous financial contributions. In fact, he was involved in many charitable organizations for most of his life, serving on many boards of directors, including the Bismarck- Mandan Symphony Orchestra, Bismarck Hospital/Medcenter One, Dakota West Arts Council, American Red Cross and the West Central Human Service Center Advisory Board. He was a dedicated Library Foundation board member and a member of the Friends of the Library. He also served on the Library Board of Trustees for six years.

Dick said his parents were always volunteering for things that mattered to them and so he was always taught to give back. He never questioned that a good portion of his life would be about service to others. He said, “I’ve always believed in what is now called ‘paying it forward.’ As a society, we have an obligation to give back for what has been given to us. I believe we have an obligation to serve in a volunteer capacity with nonprofits. The nonprofit world is essential.”

Dick attend a one room school house in Adams County, Nebraska from kindergarten to seventh grade, then transferred to the public-school system. Dick graduated from Hastings High School in 1958 and received a bachelor’s degree from Hastings College in 1962. Upon graduation from college, Dick became the first Peace Corps volunteer from central Nebraska. He served in Cameroun, West Africa from 1962-1964 at a teacher training college where he taught English literature and English composition, as well as geography, world history, and women’s physical education to future elementary school teachers.

From 1964-1966, Dick attended Indiana University in Bloomington, Indiana where he received his M.A. in government. Upon graduation, he came to North Dakota to serve on the staff of the Governor William L. Guy under a Ford Foundation Fellowship to study governor’s offices in 24 states.  His assignment ended after 6 months, but Governor Guy asked him to stay two more years.  During this time, he was also an instructor in political science at Bismarck Junior College. He later went to work at Basin Electric as their first personnel manager, serving Basin for 26 years, retiring in 2001 as Vice President of Administration.

Dick encouraged others to support the charities that matter to them. He said, “People should support the nonprofits they love. Of course, I think the Bismarck Library Foundation is a great charity to support. We do so much to help the Library – so the Library can continue to serve the people of Bismarck and Burleigh County, providing a place for children and adults to read, learn and grow.”

Dick Weber passed away after a brief battle with pancreatic cancer in December 2019. The Foundation honors him with this award post-mortem.