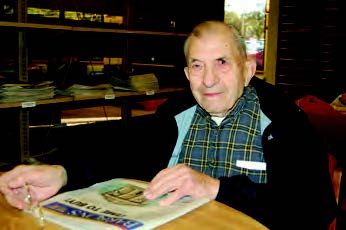 Sol grew up in Omaha, Nebraska, as the eighth of nine children. He attended Creighton University and then the University of Missouri. With his first wife, Natalie, Joy’s mother, he moved to Bismarck in 1947 intending to work for one year at the North Dakota Insurance Department as an assistant actuary. He was offered a job with Basin Electric and worked in the Provident Life building for 30 years until his retirement when he turned 65. Intending to stay in Bismarck for only one year, he has actually stayed for 71+ years. As he said, “I was the longest temporary resident to Bismarck but don’t regret it a bit.”

Sybil Sloven grew up in Bismarck and used the Carnegie Library quite a bit as a young girl. She attended UCLA and studied to become a dietitian. She moved around a bit and was living in Minneapolis when she came home on vacation and she and Sol decided to marry in 1966 when Joy was a senior in high school. She has volunteered for the Friends of the Library, working the book sales many times. Together, Sol and Sybil had a son in 1969 named Ira. Ira came to the Library often when he was young and learned to read. He still loves to pick out and buy books at the Library book sales. Sybil has been a very strong advocate for the developmentally disabled. The whole family had been instrumental in the ARC lawsuit years ago. 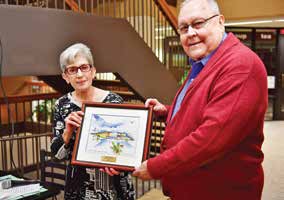 Joy Wezelman remembers being an avid user of the old Carnegie Library and because her mother Natalie read a lot, so did Joy. Joy has many connections to the Library – she was on the Library Board of Trustees, and has been involved with the Foundation and the Friends of the Library through the years. Joy made a special donation to the Library of the Encyclopedia Judea, after the old copies became worn. She says her family has used all parts of the Library – from her studying here for her law exams to her father coming in every day after he retired to read the Wall Street Journal.

Sol said, “I’ve seen the Library grow through the years and it has changed greatly from its early years. I would stop by on my walk to and from work almost every day to read the financial newspapers and magazines. The Library is a wonderful asset to the city and sadly so many others don’t realize it or make use of it. Compared to so many other libraries, ours is a gem!”

Library Director Christine Kujawa has fond memories of Sol bringing treats to the Library staff every week. She said, “For several years Mr. Wezelman brought in cookies for the staff to have for their morning break. He’d stop over at the Information Desk every Tuesday morning, which happened to be my shift, hand the cookies to me and say, ‘You know what to do...’ and then wink at me. Then he’d head over to the newspapers to catch up on news. It’s really a testament to his character, that his family would not only make very generous major donations, but that he would also do something so kind for us on a ‘smaller level.’ It really meant a lot to all of us, especially the staff who worked on Tuesday mornings because they got to eat the cookies!”

Indeed, Sol remembers his kind gesture as well. He said, “When I could no longer walk to the Library, I had a special parking place and the ladies, seeing me come in, would have my papers ready for me to read. Of course, I’d be bringing the cookies to them every Tuesday. Now, however, I rarely leave my home. As I age, my mind is willing to travel but my body isn’t. And, of course, I miss my visits to the Library.”

Thank you to the Wezelman Family for their many years of service, dedication, and generosity to the Bismarck Public Library. Sol Wezelman passed away in January 2020 at the age of 101, his estate leaving the Bismarck Library Foundation with a generous bequest of $25,000. This contribution was placed in the Endowment Fund where it will benefit the Bismarck Veterans Memorial Public Library for years to come.