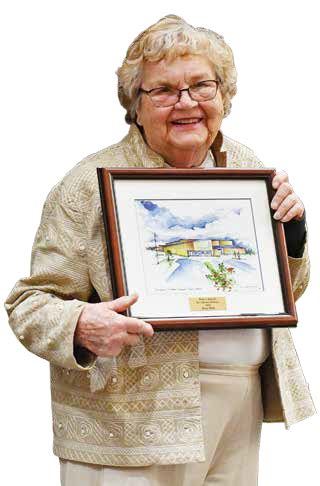 Congratulations to Betty Mills, the recipient of the 2016 Bismarck Library Foundation Pearce Award.

Library Director Christine Kujawa had this to say when presenting Betty with her award: “Betty is a lifelong advocate of this library andliteracy for all ages. She played a significant role in starting the first Friends of the Library group in 1961. The group’s goal was to start a campaign to build a new library, because the community had outgrown the Carnegie Library, formerly on Thayer Avenue and 6th Street. The campaign was successful, and in 1963, the Veterans Memorial Public Library was constructed. One of my favorite “Betty stories” about this time period relates to the moving of the collection from the Carnegie building to the new library. Betty and a few other library supporters filled grocery carts with books and walked them back and forth until the entire collection – close to 100,000 titles – was moved from one building to the other. They did this in one day!"

After the library opened, the Friends started a book club named “The Book Thing” that met at the library. Several of the founding members of this book club still meet – their book discussions continue 54 years later. In 1964, Betty co-authored the book, “Mind If I Differ?” with Lucile Hasley. She served on the Veterans Memorial Library Board from 1965- 1971. She later served on the Library Foundation board. Betty is a Gold Card Club member of the Library Foundation. She has supported major library capital campaigns, including the renovation of the Children’s Library in 2009 and construction of the Teen Center, which opened this past January. Betty has also been very active with several other organizations throughout the years. These are just a few: She was a founding member of the Unitarian Universalist Fellowship & Church, which started in 1952. Betty was a politics and government columnist for the Bismarck Tribune for 25 years. She was instrumental in bringing public television to Bismarck. She was a charter member of the League of Women Voters chapter in Bismarck. She taught non-violent communication methods to prisoners at the North Dakota State Penitentiary.

Betty’s cousin Kermit Lidstrom, who also served on the Library Board and Foundation Board, once said about her, “In her quiet way, she founded the local League chapter, started a church and built a library.” What an impressive record of public support. Betty also served on several committees, including the Bismarck City Planning Commission, North Dakota Educational Broadcasting Council, the ND Advisory Committee to the U. S. Civil Rights Commission, Supreme Court’s Public Trust and Confidence Implementation Committee, and the North Dakota Legislative Compensation Committee.

When asking Betty, “Why is this library important?” she said, “The Bismarck Public Library has grown with the demands made on it over the years since I’ve been a member – from the overcrowded original Carnegie building to the present multipurpose structure. That it also provides education, amusement, creativity, and comfort for every age makes it a treasure for all of us. If I could only show potential residents one feature of our community, I would take them to the library.”