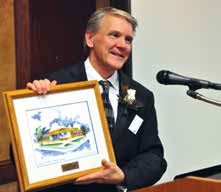 Erik Sakariassen was awarded the 2014 Pearce Award for Library Service by The Library Foundation at a dinner held in his honor. The annual award recognizes a person for significant contributions to Bismarck Veterans Memorial Public Library, to literature, and/or to learning in Bismarck.

Sakariassen has served on the Foundation’s board since 1998. He has served as vice president, president and has chaired the Finance Committee for 15 years. He assisted with the campaign to begin the Foundation's Endowment Fund and co-chaired the $643,000 Children’s Library Project from 2007 to 2009. He and his wife, Amy, are among the top donors to the Foundation.

During the gala event, John “Bob” Sakariassen described the role of literature in their family as Erik was growing up. “The printed word was the cornerstone of our family’s livelihood. One night a week was set aside for our family to go to the library.”

His volunteer efforts on behalf of literacy also include teaching English as a second language; promoting reading as chairman of the N.D. Center for the Book from 1994-1998; chairing the Governor’s Advisory Council on Libraries and Library Vision 2004 to streamline library services in North Dakota; and serving six years as a member of the Board of Directors of Bismarck Public Library.

“If we were to define the personification of the heartfelt, literacy supporting, book loving, community engaged, public library lover, we could simply say ‘Erik Sakariassen,’” said Christine Kujawa, Library Director.